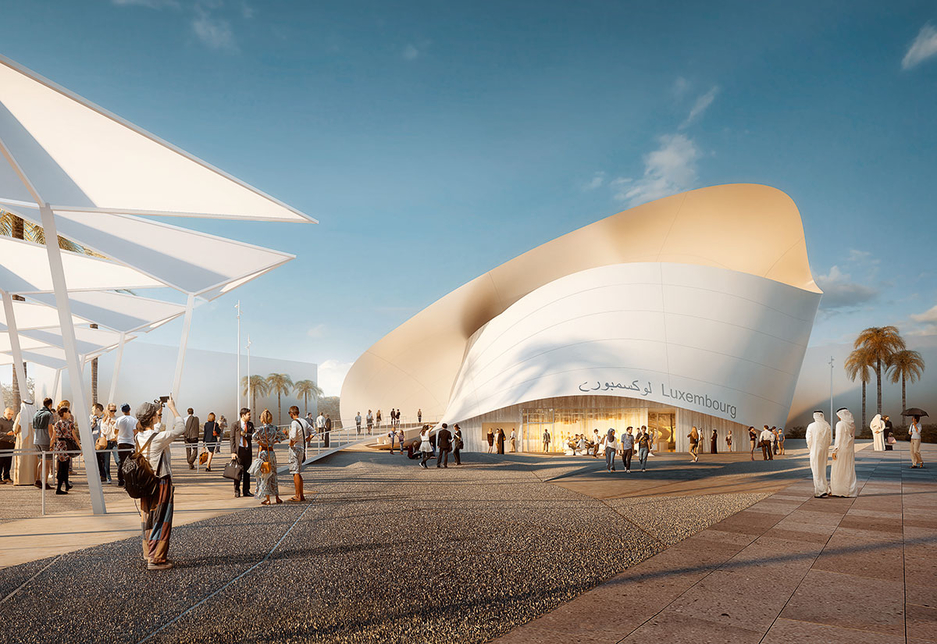 The commissioner-general of the Luxembourg Pavilion at Expo 2020 Dubai discusses the construction progress.

The Luxembourg Pavilion, which is located within the Opportunity District of the 4.38km2 Expo 2020 Dubai site, has crossed the halfway mark in its construction and is on schedule to complete before the 173-day event begins on 20 October.

The milestone is not surprising, given the fact that Luxembourg was the first country to sign the participation contract with the Expo 2020 organisers.

Commenting on the construction progress, the commissioner-general of the Luxembourg Pavilion at Expo 2020 Dubai, Maggy Nagel, tells Construction Week: “We were among the first to receive a building permit. We broke ground on the project in 2017 and began construction works in August 2019.”

Nagel adds: “We are on schedule to complete construction of the pavilion in the summer of 2020.”

The pavilion, designed by Luxembourg-headquartered METAFORM Architects, bears the spiral shape of the Möbius strip, representing the infinite form of a circular economy, unending opportunities, openness, and dynamism.

The Luxembourg Pavilion will take Expo 2020 visitors through a journey along its 140m ramp which – similar to the pavilion’s design – spirals upwards from the ground floor to the second floor.

Nagel says: “The way to move through the pavilion is by going up a ramp that will take visitors from the earth to the stars. Visitors will also enjoy a journey through the five senses.”

The pavilion showcases a green atrium, which reuses the water from the chiller to water the plants in the pavilion.

The pavilion will be ventilated naturally, although traditional methods of cooling will be used during the summer months.

In addition, the Luxembourg Pavilion will host a restaurant called Schengen Lounge, which will be operated by Dubai-based Jumeirah Hospitality.

The restaurant will offer traditional Luxembourgish and Emirati cuisines, and will be built to include an open kitchen, as well as a take-out corner called “Luxembourg on a plate.”

As visitors move up the ramp, they will be led through the pavilion’s themes –diverse, connecting, sustainable, enterprising, and beauty – which culminates with a space on the second floor where the visitors can ‘explore the stars’.

Nagel says: “For a long time, Luxembourg has been viewed as the paradise for finance, but now we want to show that Luxembourg is more than just that.”

The second floor has a dark room that will showcase the latest space technologies.

“After viewing the latest in space science and staring at the stars on the second floor of the pavilion, people can ‘come down to earth’ to see how beautiful and green Luxembourg actually is,” she adds.

Visitors can either head back down the ramp to the ground floor or be a little more adventurous.

“Unlike anything else at Expo 2020 Dubai, the Luxembourg Pavilion will have a slide, which people can use to come down from the second floor,” Nagel explains.

Dubai’s Al Ahmadiah Contracting & Trading are the local contractors associated with the construction of the pavilion, while the UAE-based WME – which provide engineering services for built environments – are the consultants.

Other stakeholders involved in the pavilion include Goblet Lavandier & Associés and consulting engineering firm Aucarre.

Another key takeaway from the Luxembourg Pavilion is its focus on sustainability and a circular economy – 70% of the materials used in its construction are expected to be reused after the event.

Commenting on the building material, the partner at METAFORM Architects, GG Kirchner, tells Construction Week: “The steel structure that forms the Möbius strip design will be dismantled after the Expo 2020 Dubai completes, and will be reused and recycled.”

“The glass-fibre membrane that covers the steel structure of the pavilion is not welded into place, which means that it can be lifted off and reused for other purposes, after the Expo 2020 Dubai concludes on 10 April, 2021.”

The pavilion has also considered sustainable methods of reusing water and keeping the building cool.