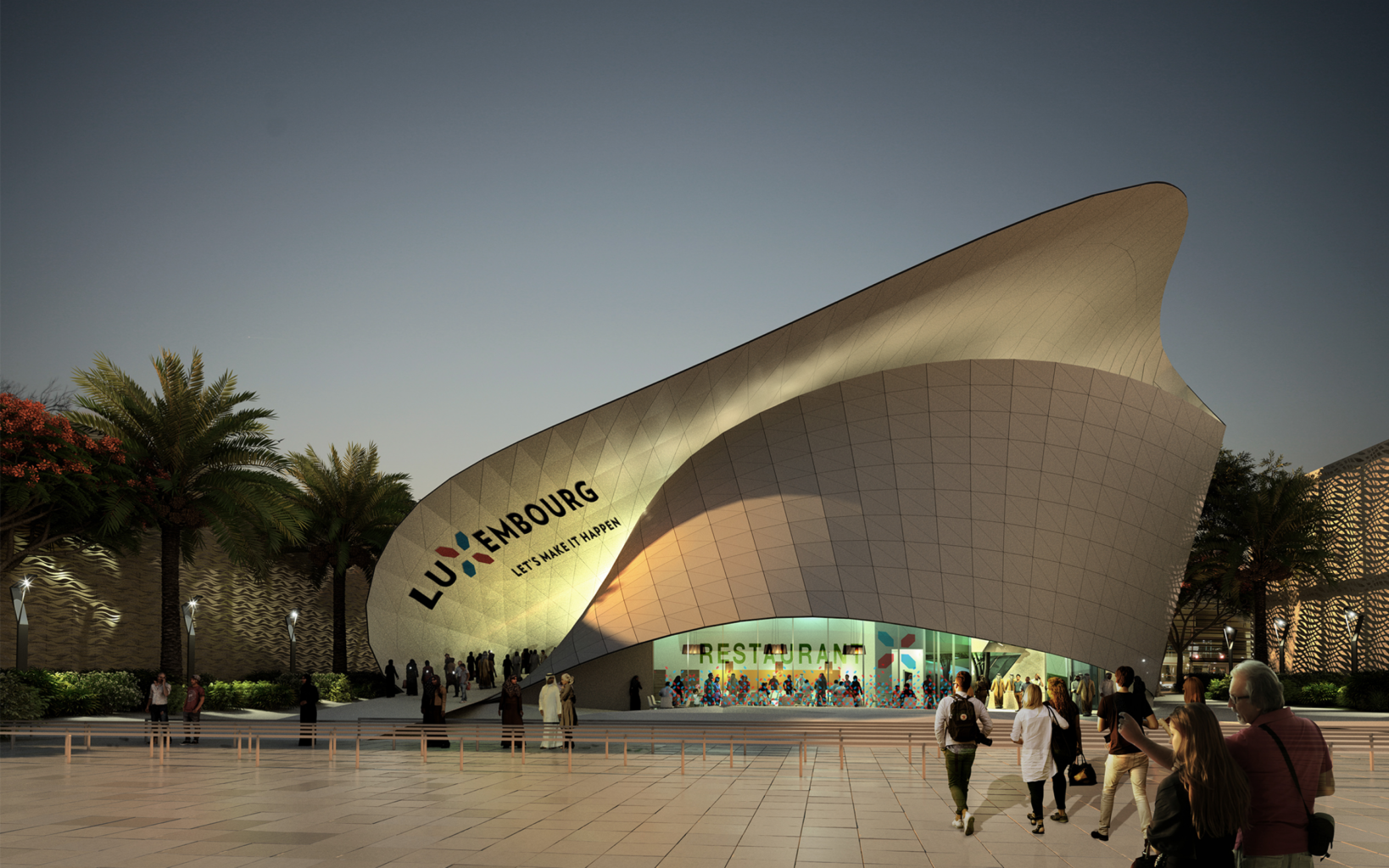 The steel structure and the glass-fibre membrane that forms the pavilion’s Möbius strip design will be reusable.

The $32m Expo 2020 Dubai Luxembourg Pavilion, which is located within the Opportunity District of the 4.38km2 Expo site, has announced 45% completion on construction.

“We have been on the pole position in every regard,” the Commissioner-General of the Luxembourg Pavilion at Expo 2020 Dubai, Maggy Nagel, tells Construction Week.

Nagel explains: “We started as the first country to sign the participation contract with the [Expo 2020] organisers, and were among the first to receive a building permit. We broke ground on the project in 2017 and began construction works in August 2019. Now construction work on the pavilion is 45% complete.”

The Luxembourg Pavilion is being constructed as a spiral-shaped structure based on the idea of the Möbius strip, representing the infinite form of a circular economy.

“The idea for the design of the pavilion comes from our architect – METAFORM Architects. It reflects the opportunities, openness, and dynamism of the Luxembourg pavilion,” Nagel adds.

The shape of the pavilion also corresponds with the journey that people will take through the pavilion’s 140m ramp, which according to Nagel spirals upward “from the earth to the stars”.

The concept of the circular economy is also evident in the pavilion’s materials – 70% of which are expected to be reused after the event.

“The steel structure that forms the Möbius strip design will be dismantled after the Expo 2020 Dubai completes, and will be reused and recycled, to promote a circular economy,” the partner at METAFORM Architects, GG Kirchner, says.

In addition, the glass-fibre membrane that covers the steel structure of the Luxembourg Pavilion, not only meets the fire and life safety parameters set by the UAE authorities, but can also be lifted off the pavilion to be used for other purposes, after the 173-day Expo 2020 Dubai concludes on 10 April, 2021.

The pavilion will also – to a large extent – be ventilated naturally, although traditional methods of cooling will be used during the summer months.

“The pavilion will also comprise of a slide, which people can use to come down from the second floor”

Dubai’s Al Ahmadiah Contracting & Trading are the local contractors associated with the construction of the pavilion, while the UAE-based WME – which provide engineering services for built environments – are the consultants for the pavilion.

The construction of the $32m pavilion is being primarily funded by the Luxembourg Pavilion’s partners and sponsors, which include POST Luxembourg; communications satellite owner and operator SES SA; and the Chamber of Commerce, each of which have contributed $2.5m towards the pavilion.

Commenting on the customer experiences offered within the built environment of the pavilion, Nagel tells Construction Week: “The pavilion will also comprise of a slide, which people can use to come down from the second floor. You will not find such a slide in any other pavilion. In addition, we have also captured the smell of the Luxembourg forests – the smell of nature – which we will defuse into the pavilion.”

Nagel says: “After viewing the latest space science technologies and staring at the stars on the second floor of the pavilion, people can ‘come down to earth’ to see how beautiful and green Luxembourg actually is. For a long time, Luxembourg has been viewed as the paradise for finance, but now we want to show that Luxembourg is more than just that.”

Other stakeholders involved in the Luxemboug Pavilion include Goblet Lavandier & Associés and consulting engineering firm Aucarre.

Gastronomy services at the nation’s Expo 2020 pavilion will be seen to by the Ecole d’Hôtellerie et de Tourisme Luxembourg; Horesca; Vatel Club; Lycée technique de Bonnevoie; and the Institut viti-vinicole, which is Luxembourg’s national wine institute.